The competitions of the Battle of the Bow during Plague Wars and the Knäckebröd War are four modified versions of the original competitions in the SCA as SSAC – Society Seasonal Archery Competition and a shortened Portsmouth round.

The original SSAC can be found here

The modifications, mostly shortening the distances, are done to hopefully suit archers at home to be able to join.

The competitions in the Battle of the Bow

The competitions can be shot at any day and in any order during the event.
The results need to be reported after each competition using this form.
Send your score to the archery marshal, no later than 1 p.m. (Swedish time) on Sunday the 16th of May.

Competitors gather points based on the standings in each competition. It’s the archers’ own responsibility to report his/her result in each competition to the Plague Wars archery marshals. This means that you can have one score in your "own" competition, but get another score in the overall standings list. If two archers finish at the same place they both get the same points.
When reporting, only fill in the score. Not the points for the standings in your "own" competition.
The standings are counted, by the Plague Wars archery marshals, for all participating archers once reported.

Your score in the overall standings list can decrease depending on the number of participating archers and how well they do and also depending on when the competitions are being shot and when the score are registered.
The list is recalculated every evening.

Divisions: adults 16 years and up, youth 11-15 years, children 0-10 years
Divisions only by age so that means that period and open bows compete in the same division.

The distances are shortened to 10-15 yards.

Target:
The target face is 20x20 inches and divided into 25 squares of 4x4 inches. The target is placed with one corner pointing upward.
The numbers are placed as shown in the drawing and should be bold enough to be read at fifteen yards. The lines should also be visible but not wider than 1/4 inch. 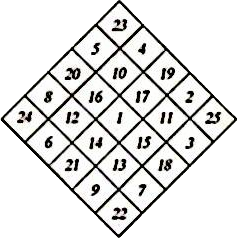 Running the Shoot:
Two ends,  six arrows in each end.

Scoring:
The scoring is the value of the square hits. A square may only be hit once in each end. Repeated hits to the same square by the same archer do not count for additional score in the ongoing end. The archer may hit any or all of the same numbers in the next end. If an arrow hits the line between the squares, always count the highest number. The maximum score per end is 135 points, for a maximum total of 270 points.

Fun Facts:
This competition seems to have begun in the Netherlands in the 1400`s. There is a period illustration showing part of a circular target where there are numerical values in arcs of the circle. And there is mention of square targets with a series of smaller squares of different values.

Rules:
It is simply a fun shoot which forces you to weigh your skills versus the risk you wish to take. The highest points are the closest to the highest negative points.

Target:
Take a standard FITA 60cm target and draw two half-circles to make an `S` curve that stretches from top to bottom of the target`s scoring area.
If you do not have a standard FITA 60 cm target, it is ok to draw your own.
The diameter of the rings are 60, 48, 36, 24 and 12 cm. Feel free to color them for better visibility.
The score count is 1-5 points according to the colored fields, ie white is 1 point and then on to yellow which gives 5 points.

Use a marker to make the S more visible. 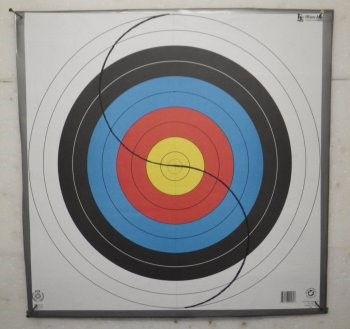 The challenge consists of 4 ends.
Scores CAN go below zero. Your final score may be negative for example -10.
Arrows that break the line or just touch the dividing line between scoring zones are scored in the archer`s favor.
Archers must shoot the ends in the order listed.*

Scoring:
1-5 points, but with negative values for hitting the Foe/Other side.

Yes, your total for any given end *can* be negative!

Ends:
Yin Stages
For the two Yin ends, the upper/right area has positive values, the lower/left area has negative values. For example: a shot high and right in the black is worth 2 points. But a shot low and left in the blue is -3 points.

Yang Stages
For the two Yang ends, the scoring values are flipped - the upper/right area is now negative, the lower/left area is positive.

Target:
This shoot has two targets, Quarterly and Saltire.

Quarterly - target is an 20 inch square divided quarterly, which is split vertically and horizontally to make four 10 inch squares. In the center of each square is a 3 inch diameter circle.

Saltire - target is an 20 inch square divided saltire, which is split from diagonally corner to corner to make 4 triangles. In the center of each triangle is a 3 inch diameter circle. 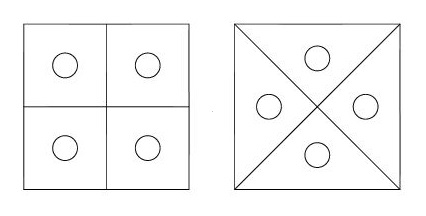 Ends:
There are two ends at each target, all shot at 15 yards.

Scoring:
Arrows must touch the colored portion of the space, not just the black dividing line, to count for that space. Each arrow may only count toward a single quarter/saltire.

If all four quarters/saltires (including the circle within) are hit then your total score is doubled.

For purposes of the Plague Wars the target is modified by the addition of a number of heads representing the Corona virus.  The size is also modified to fit on a 60x60 cm target face. 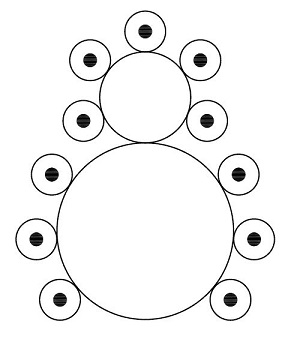 The target should contrast with its background.

Scoring:
The horse is 1 point. The body is 3 points. The head is 5 points. The visor circle is 15 points.

There is an Arabic version of the Triangle Target which was based on an Oriental target, which also represented a warrior on horseback. But, unlike the Triangle, it is based upon two circular disks which represented the shield and the head. In the Arabic original which was used as a form of practice, the target was placed at just under the maximum cast of the bow. The archer practiced at this target using five arrows until he could hit the disk representing the shield without missing a single shot. Then he advanced to shooting at the disk representing the head of the warrior until he could hit it with all five arrows without missing. The size of the head disk was one span or about nine inches and the shield was three spans or about twenty-seven inches. (From 'Arab Archery' by Robert Elmer and Nabih Amin Faris.)

Based on a standard Portsmouth round

And something just for fun!

A common indoor competition in Drachenwald.

If a target archery marshal is present when you shoot the Portsmouth round, you can count that result to gain ranks in Drachenwald Company of Archers. The marshal must also send a score sheet to the Drachenwald Captain of Archers.

Goal:
To make a smiley. This competition is supposed to be fun.

Rules:
Choose your own distance, recommendation is 10-15 yards.
Shoot 6 arrows at your own pace. You don't need to use all of them if you are pleased with your smiley with less arrows.Then explain your finished art to your archery friends. Make your opponents see your "picture".

Points:
5 p for arrows that is a clear part of your smiley. 10 p if you can motivate your smiley well.

Hints:
Your smiley does not have to be a humanface-like smiley. It could be a fantasy figure for an example of an alien or an animal of any kind of fantasy figure.

Version I: 3 arrows per participant

Distance:
Optional, but we recommend 15 yards.

Version II: One arrow per participant

Distance:
Optional, but we recommend 15 yards.

Put a mark in the middle of the target, for example an apple slice, a dot about 3 cm in size or use the 10 point circle on the FITA target face.
Participants shall try to hit as close to the mark as possible, the arrow that is furthest from the mark in each round are out. Measure with a string if the eye measurement is not enough.
The winner is the participant with the last arrow left.

Fasten the animal pictures on the target and try to hit them.
Or make your own 3D-animal body by following the suggestions in the link

Rules:
Each animal has 2 rings. The smallest ring is the heart 5 points, the outermost ring is the lung 3 points. If you hit the animal anywhere else (head, body, legs, vings) you get 1 point. We recommend using 3 arrows per animal. Count the score on each animal eg 1,3,5.

Distance:
Optional, but we recommend 5-15meters depending on the size of the animal.
Good luck!